Something is in the air Tadpoles. I don't know what it is. . .but Sunday was epic!

Two things well known about me are that I don't like any type of shopping except the grocery kind and I LOVE a bargain.

Yesterday was so cool.

We all know Thanksgiving is Thursday. However, we won't be eating the traditional meal on Thursday because the kids can't make it home until Friday. No worries, we're going the Mimosa and Sloppy Joe route that day, while prepping everything for Friday and watching the parade. Works for me.

We did want to make sure we had everything purchase before Thursday tho' and we decided to go shopping at ALDI.  I have an unabashed love for this grocery store. There are so many reasons, but today I am going to focus on one of my favorite things about their store.

Prices. I can literally get three times the food for the same price as I could at Food Lion or heaven forbid Giant Foods.  For example - three weeks ago I went shopping with Steven and we purchased enough food for 3 weeks of breakfasts, lunches and dinners for $160. We ate chicken, pork, ground round, sausage and soups. They only thing we replenished in three weeks was bread, milk and juice.

This makes me happy. So, so happy.

Our Thanksgiving menu consists of the following [keep in mind everything is fresh and homemade. I don't buy boxed or canned goods with the exception of boxed chicken broth because I don't have any homemade made and stocked in the freezer.]

I didn't write that list to bore you or even make you drool - I am doing enough of that for all of us - I write it because I still can't believe how little we paid for all of the ingredients. I could feed 6-8 people with our meal and it only cost:  $48.24. That's $7.10/per person for 6. Not too shabby.

Even better?  We will have leftovers Saturday [Gravy with turkey and mixed veggies over waffles - again, don't ask. It is SO good.] Then I will boil the carcass and make turkey soup, pot pie and Thanksgiving sandwiches with the remaining turkey. So actually my food cost is much lower. YAY!

We have never, ever paid so little for Thanksgiving - and we know, as we make the same exact menu every single year.  Even when I could purchase turkeys for .39 cents a lb [25 years ago] I still spent upwards of $100 for 8.

Even better than that bargain?

Wait - let me back up a moment.  I talked about this on Facebook, but I realize not all of you are there [and if you are, why aren't we friends? :)  ]

This goofball, our very own Evie Lou [Wallene], was accepted into the National Honor Society. We could not be more proud and I have to say, with all the turmoil in her life in the past 4 years [my health, losing our home, moving in her Junior year of HS, etc] we are amazed at the hard work and perseverance she put forth to earn this honor.

Tradition in our home is if you are accepted into NHS Mom gets to pick out and will purchase you a new outfit for the induction ceremony. I know, pushy right? But you can only imagine the fights that would ensue if we let them dress in school clothes for this. It's a big deal.   I have done it before, to the liking of her siblings, but with Evie?  She was having none of it.  And really? It's our last kid and I am worn out by being sick, so I told her to go shopping by herself and Dad and I would pay for whatever she chose. She knew I had to approve, and I gave her parameters. Then I sent her out.

On the way home from the grocery store Steven received this pic' on his phone. I was shocked that she had actually listened and found something appropriate for the ceremony. Look! Her she is in the dressing room: 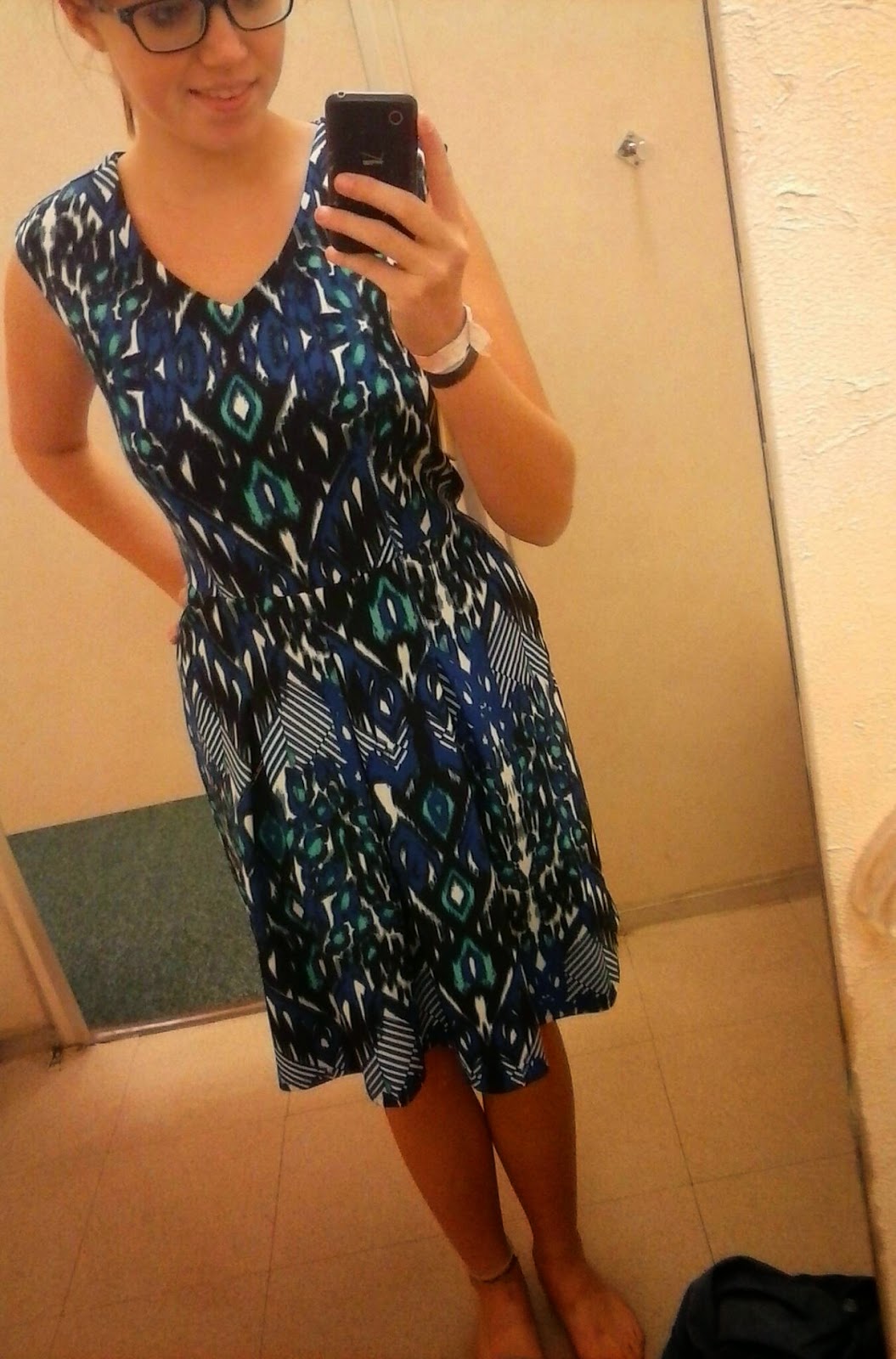 We arrived home and Evie was already back from Cato [the only women's clothing store in Orange, VA] and she came walking down the hall holding up a blanket. I asked her what the heck she was doing when she suddenly dropped the blanket and was wearing this dress.  I squealed because it looks even better in person [she paired it with the cutest belt] but I was confused.  We hadn't given her more than $5 [to eat lunch while she was out shopping] so I asked her how did she get the dress home. Certainly $5 wasn't going to buy a dress that nice. [Btw, for those who care - it's completely lined. It's a NICE dress.]

HOW AWESOME IS THAT? ::skippyhappydance::

It's the little things Tadpoles. Simply the little things.
Okay, that's all I got for Monday. I hope everyone has a lovely holiday [if I don't make it back here] and we'll see ya' on the flipside.

Smile loudly, LIFE IS A GIFT! Love and hugs, Janine
Scribbled by SkippyMom at 7:27 AM 9 comments:

Retro in the Pond

That should probably read archaic, but let's go with retro - sounds cooler.

It's no secret I don't own a cellphone. I don't need one. I hardly go anywhere alone, and if I do I am usually back at home within an hour or two. So, if the school, my family or friends need me? The house phone works just fine.

Not owning a cellphone isn't retro, but my house phone is.  Check this out. . .it was my grandparents and sat on their desk for as long as I can remember: 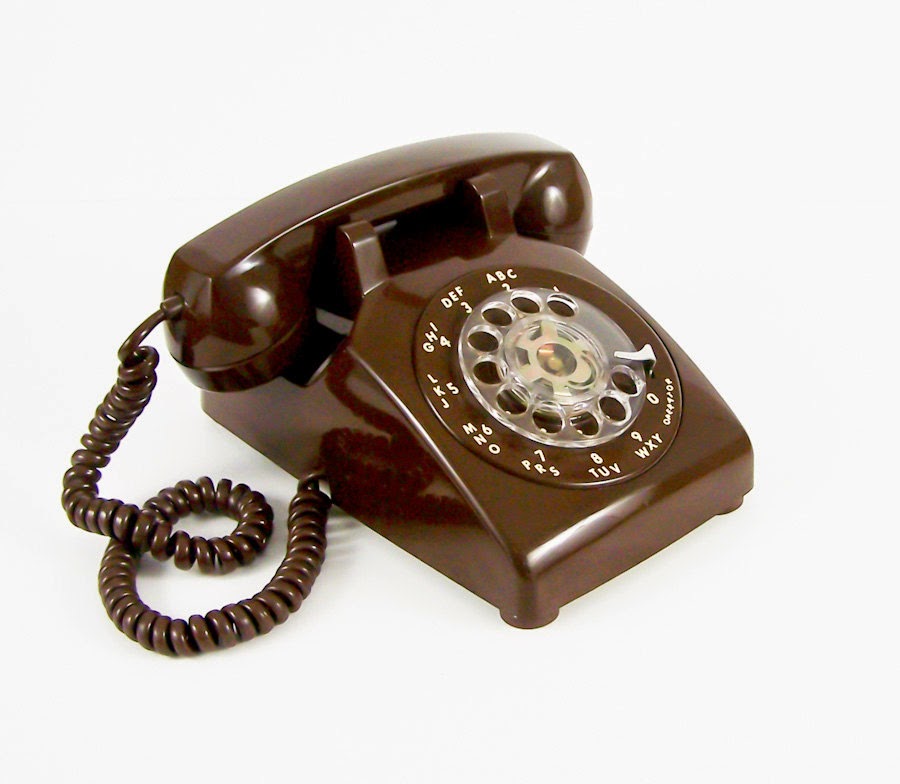 It's a stock photo, but our phone looks exactly like that.  I have the phone because when my grandparents passed away my mom took it because she thought the great grandkids would get a kick out of playing with it.  They did. They all love this phone.  They had never seen one until my mom put this one in the toy box. This phone is in my will because otherwise they are going to bicker.

The biggest bonus to this phone is, obviously, that it belonged to my grandparents and I have such fond memories of them and being at their house. When it rings here, it reminds me of being with them on the farm.

However - it has a few drawbacks.  First, the ringer is LOUD. Dang LOUD. So loud that everytime it rings the dog goes bonkers and tries to attack it, but we never miss a call.  I could be over at the neighbor's across the street and I can hear this thing.  Second, it is rotary.  I know we all grew up with rotary phones, but raise your hand if you have dialed one in 30 years.  Tadpoles - it is a serious time commitment when you are used to push button phones. I will get all excited to call my MIL or Steven to tell them something and I am standing there for a good minute DIALING. giggle I know - no big deal, but I tease my husband all the time and tell him that he needs to call me, I don't have time to dial. And finally, let's all admit it - it's brown. Brown isn't a bad color, but brown? It's ugly.

But I love it.

Let's continue onto other things we own [or don't own] that are out of the norm for the 21st century.

We don't have a drip coffee pot or a coffee maker.  I make Steven's coffee in our camp coffee pot.  Yeah, no kidding.  When we moved we misplaced our automatic coffee maker and in a "first day in our new home desperation" move I pulled this out. 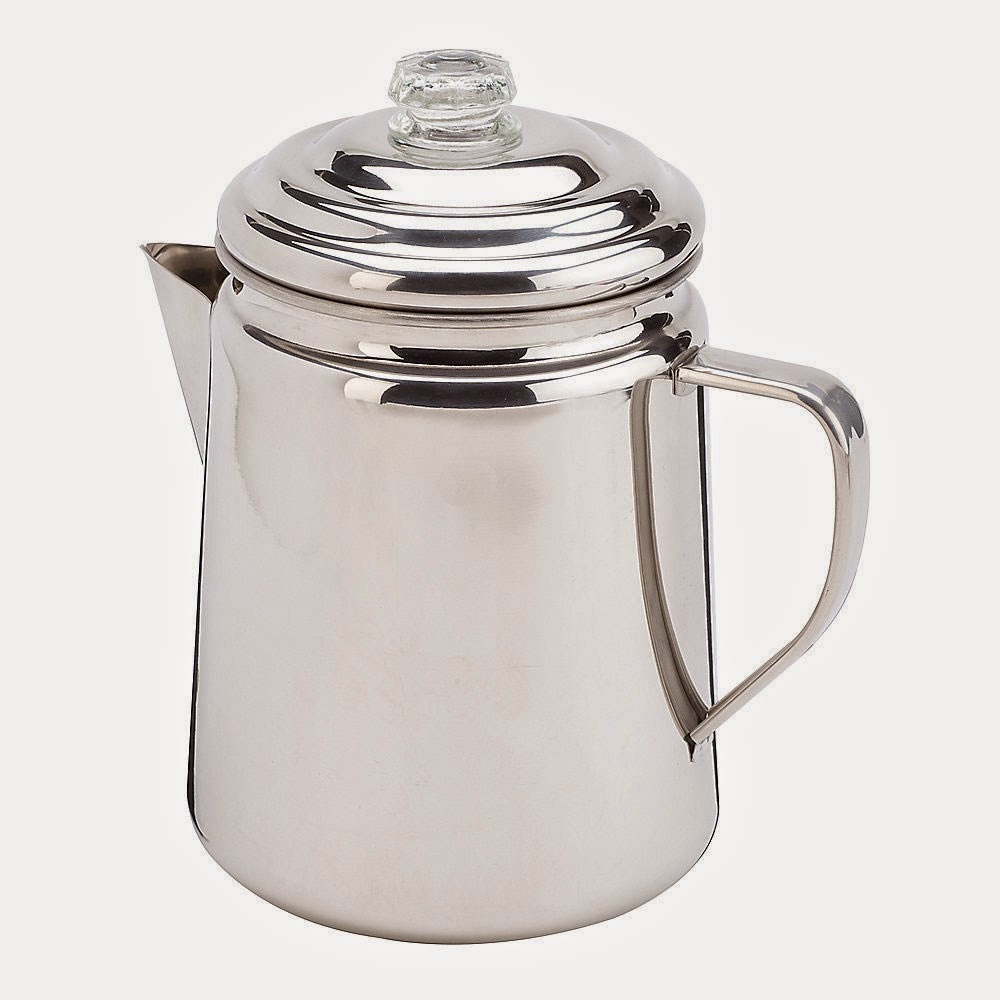 Again, a stock photo but that's our pot, but ours has wear and tear. Steven loves the taste of the coffee so in the 14 months we have lived here I just never bothered to go buy another Mr. Coffee or a Kuerig.

Which brings me to having to admit we do not own a microwave either. ::GASP:: We did. In fact since we moved in we have owned two.  But we have had two electric blow outs in our home - one even set part of the basement on fire OH JOY! - and in the process roached both of our microwaves.  Turns out that the electrical company hadn't grounded our home outside, eventhough they came  out the first time and said it was an inside issue.  We had an electrician in after the first power surge and thought we had solved the problem, but nope. It happened again and it was the electric company. They fixed it and we haven't had any fires or flashing lights in over 6 months. ::skippyhappydance::

Not having a microwave kind of sucks.  I never cooked in it, but I liked it for tea, oatmeal and reheating food.  Now I reheat my lunch in the oven - and being the instant gratification kind of gal that I am [see what I mean about dialing the dang phone?] I hate waiting.  Tea and oatmeal, which is an almost everyday thing for me, is a little bit better because I unearthed the "Teapot From Hell" in our move.

Anyone remember this little number? 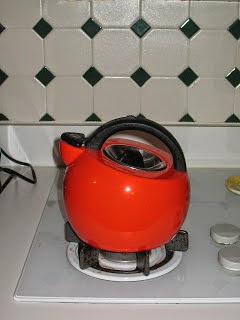 It is a Rachael Ray teapot that I received for free - I only had to agree to post on my blog about it.  And boy did I!  This tea pot is a hazard, but it's so happy I never got rid of it.  If you want to read the review of it's faults, it's here:  The Rachael Ray Teapot Has Arrived.  I was honest - and I found out that in recent years they have actually redesigned the teapot based on reviews like mine and other bloggers.  Since I am intimate with it's faults I know how to use it without harm. I am just glad they don't produce it anymore.

But really? I wish the ringer dial wasn't broken on my grandparents' phone. I don't know how much more of this Spot can take. :)

Smile loudly. Life is a gift.
We'll see ya on the flipside Tadpoles.
Love and hugs, Janine

Currently In the Pond

'Cause it Makes Me Laugh and I Want One